With the recent devestation of SuperStorm Sandy, I was thinking about an old friend.

I was a young PD and he was the grizzled vet who was VP at Arista and various other record companies before he started AIM Strategies which was one of the first companies to promote triple-A rock stations in 1993 and one of the only record contacts I had when I started working for Rock 101.1 back in 1999.  Aim’s ongoing support of classic rock acts was bolstered by the Web site  www.classicsdujour.com and the fire of two people, Paul and Elena.

Paul Yeskel was not only a mentor but someone who told me to stand my ground when I needed to but yet tried his damnest to make sure that I had a good point for everything I did. “Don’t tell me you’re not adding it Sean, tell me WHY you aren’t adding it.”

Elena was his go to girl, the woman who kept sending me Tesla single because I kept asking for them and yet sent another one when the first one was thrown off a 2 story building and hit by a tractor trailer, another that found its way to a shredder and sent me a fourth even as I described how I was bending it in two because I thought the song sucked so bad.

But that was Elena and Paul. Elena would ask nicely and then Paul would come on asking me to give him the reason. He was the bad cop in the good cop / bad cop situation and yet I loved his honesty, fight and his ethics.

One day he was trying to get a Rolling Stones CD played on every Classic Rock station in America and yet I said no. I told him that it was no better than Achy Breaky Heart and I wouldn’t play it.

But then again Paul never took no without making me smile… days before the official add date was I received the following note. 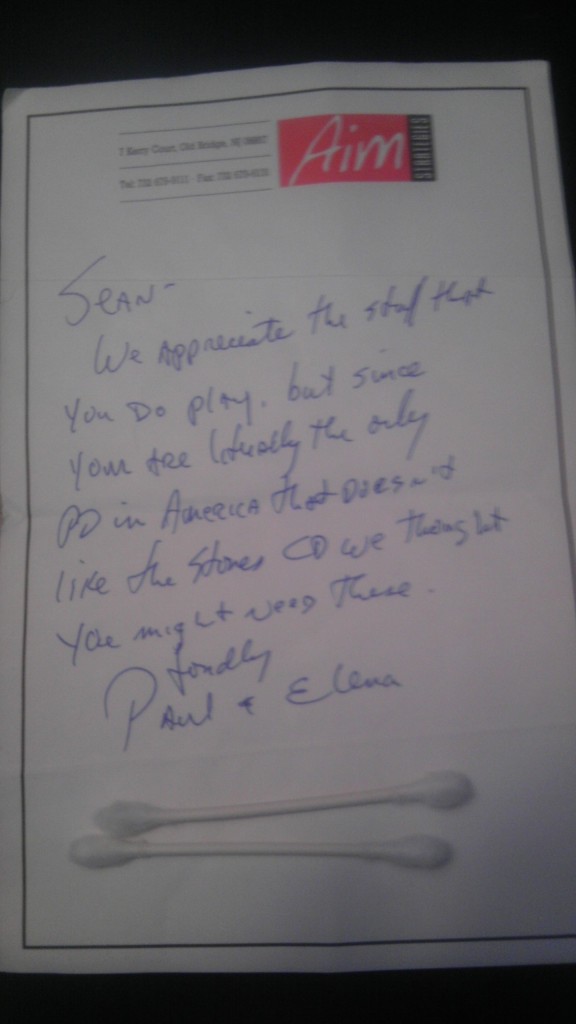 I didn’t add the record. It flopped after one week. Paul and I always had a great laugh about me being the only PD that told him no.

As you can see, I still have the letter, as it is one of my most prized possessions.

I took my stand and to this day Elena and I have a laugh whenever either of us brings it up.

But to this day I remind myself that no matter what I do, to always have an explanation of WHY I am doing it.

Because I know at the pearly gates when I arrive, Paul will meet me there, with yet another copy of that awful Tesla song and a Rolling Stones single.

Paul will hug me, bring me through the VIP gates and tell me how glad I was there because I had some great music to listen to.

I miss you sir. I’m trying to make you proud.

One thought on “A Jersey Moment”