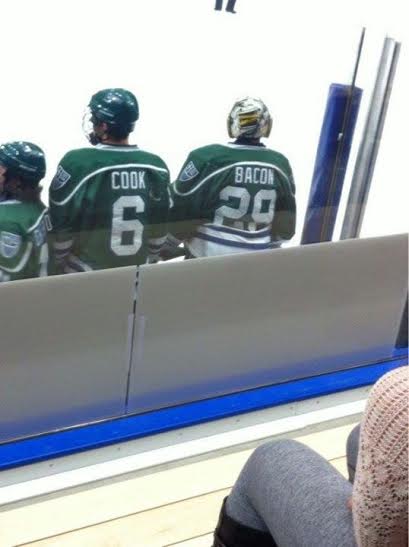 We here the chants come during march Madness. The chants as “lesser” teams beat teams they shouldn’t.

You can hear it in your head can’t you.

But I had a friend who said to me today that “Bacon was overrated.”

What? Really? In my mind I told him that I could tell him 5 things off the top of my head that were more overrated than Bacon. So he challenged me to name 10.

Fine. You asked for it.

My top 10 things that are more overrated than Bacon.

There, I said it. There are some places in the world that don’t have cable / satellite TV. Why should they have to pay to enjoy a tradition that goes back to 1970. Why should my uncle be forced to pay someone to watch a game that he is going to scream and yell at, especially since he is deaf because the closed captions of Jon Gruden are something like – “mumbling something moronic” ?  MNF on ESPN is more overrated than Bacon.

#9. Election coverage that starts the day after the LAST ELECTION!

There are a lot of things in this world I enjoy, politics being one of them, but why can’t we all take a time out and just let the last ballots get counted before we look to the next election. Why can’t we just let the morons we just elected screw up before we put them on the block again.

God Bless you Don La Fontaine, but the “In a world,” we live in our will to go see movies sucked clean dry because of the moronic movie trailers that exist now. Want to see almost every funny line in a comedy movie? Watch the damn trailer. Yeah, there are some lines that they are holding back , but my god, just give me a summary of the movie and don’t blow all the good stuff, because there is nothing more annoying than paying $9 to see a movie that I could have just watched the trailer for.

You want overrated? How about Black Friday which has crept into Black Thursday.

There is NO reason I want to go to any store at 3 A.M. in the morning after stuffing my face with enough Tryptophan to kill a small horse. The savings are negligible, I can usually get better deals online and I’m not fighting some moron for a Happy Fun Ball. It is not worth my time, energy or enthusiasm.

I see so many people use hand sanitizer instead of washing their hands. I know the bottle says that it kills 99.99% of germs, but that 0.01% is a BITCH. If you would just wash your hands regularly and live your life with a degree of common sense, you wouldn’t need to OD on hand sanitizer. Is it a miracle cure? No.

We live in a world where technology is getting more complex and cheaper every minute.  My first computer was a Timex Sinclair with 2K of memory and a tape hard drive. Now I am sitting here with 6 Terabytes of information on various hard drives and that is not including the other drives I don’t have plugged in with my 8 megs of memory.

But as successful as I might think this world has evolved… we still have people who give information on a backbone as advanced as a Timex Sinclair. Come on, upgrade your systems and come to 1995… I won’t ask you to come into the 21st century because it would be too hard for you. But how about if you are going to provide a service, that after you see how badly you are getting killed that you invest in a blade or 20 more.

No picture, no explanation needed. But someone needs to kick this snot nosed brat back into reality because Lindsay Lohan is calling…

The World Wide Leader in Sports started pure, with an idea of televising sports everywhere. But today they are the 800 lb gorilla in the room. They dictate terms, keep the bowl system alive because it makes them money. If you would ask an intelligent person what has killed sports and yet made it better in the last 35 years, the answer would be the same.

#2. Any and I mean ANY commercial for any male enhancement product.

Yes, I’m sorry you can’t get it up without drugs, but I really don’t want to hear about “When the time is right.” Ask my wife, the time is right only when she says it is, not when I have a boner.  So ask a doctor and leave the rest of us men alone. if we have a problem, we’re not going to discuss it as some water cooler talk, “Hey George, I can’t get it up anymore, do you know of a product that can help me?” My response will be to kick you in the junk and laugh. (Probably not but I don’t want to know about it.)

I remember when TV’s made would last for decades. If I get one that last for 5 years, I’m celebrating. We are a consumer economy now, we build things not to last, but to amaze us.

My 1st car I called the boat. It was big , wide, but had enough steel and Detroit love that when I was ran into as a guy left a donut shop crossing 3 active lanes of traffic and into my stopped car at a left turn signal, I got a broken left tail light. His car was totaled. So here you go Mark, you asked for it. Ten things that are more overrated than Bacon. I could go on and on, but I really am hungry for bacon now.